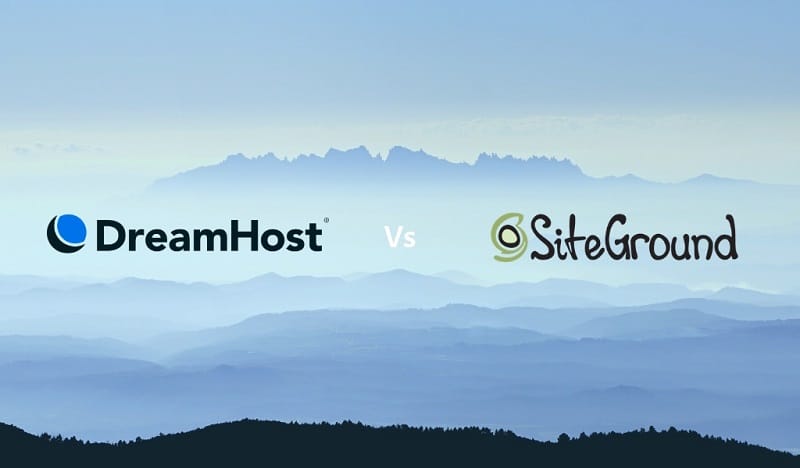 Dreamhost and Siteground are few of those companies who are independently hosted. There are limited companies left in the market which are independently hosted. Like any other hosting, they proudly promote themselves with their features and offerings. These two are very popular for managed WordPress hosting services. So, in this Dreamhost vs Siteground comparison review, we’ll see which one is best in service and for your purpose.

Table by LastWP
Get Dreamhost at 40% Discount (Use Coupon “Hosting595Coupon” on Checkout)
Get Siteground at 66% Discount, Automatically Applied

Also, If you are not in the mood of reading a complete comparison, then let me tell you that winner is Siteground because of their Security innovations. Pricing with siteground is high. So, If you are in starting of something and having a low budget then Dreamhost is also a good option. Talking about VPS and WordPress hosting, Dreamhost will be the recommendation. For Dedicated hosting and Shared hosting, you can go with Siteground but pricing is a matter with dedicated hosting from siteground. For more clearification on these decisions, read this article and comparison of Dreamhost vs Siteground.

So, let’s start with comparison review of dreamhost and siteground.

Index of this Article

In this part of the comparison, we are going to measure all the things and give an overall comparison along with the decision of which one is best in this segment. So, let’s get started right away.

Dreamhost is one of the leading hosting providers along with being one of the considerable options when someone talks about web hosting. Offering different web hosting solutions inlcuding WordPress Hosting, WooCommerce Hosting, Shared Hosting, VPS Hosting, Cloud Hosting and Dedicated Hosting.

It is a good option for those who are just beginning as their shared hosting and wordpress hosting plans are affordable as well as their performance is also good. Those who are into building website from a long time, they might not invest their money in Dreamhost’s servers.

Still, Dreamhost is capable of managing gorwing websites and considered to be a good option for starters. Their managed services includes automatic backups, automatic updates, malware scans and DDoS protection. Dreamhost is a independent host and also they helps companies like WordPress and OpenStack by code back.

Support team of dreamhost is expert in their work. Support is available all day and helps customers with their problems and issue realting to dreamhost’s products and services.

Siteground offers a good range of web hosting services along with being innovator in web hosting industry. Features you get with their hosting are Free Cloudflare CDN, cPanel with SSH access, Unlimited bandwidth, Unlimited MySQL Databases.

Also, their support team is great and provides fast support and solutions. Siteground uses their in-house built chat software which is designed according to the customer’s needs. They have developed a system in-house which prevents single vulnerability to take down all the server machines. Siteground offers 99.9% uptime to their users.

For caching and backups, siteground offers their own SuperCacher which makes your website load fast and backups are managed daily to prevent loss in case something bad happens to your website. So, overall, Siteground is the option which you should go with.

Pricing Comparison of Dreamhost vs Siteground

Dreamhost is clearly the affordable host out of these two.

Dreamhost: Pricing of Dreamhost is very reasonable and hence it becomes the choice of many people. Offering services at low cost, even then Dreamhost’s service and offerings are pretty good. Dreamhost was started in 1997 offering 97-days money back guarantee and even today this thing is the same and performance got better with time. Dreamhost offers 100% uptime guarantee with downtime compensation so that the cost you are paying will never be sacrificed by downtimes on your hosting server.

Even after being an affordable host, Dreamhost offers SSD drives which makes your website performance 20 times faster. At the same time, you are getting unlimited domains, unlimited bandwidth, unlimited storage, automated backups, security, Free domain, and a lot more stuff.

Dreamhost’s control panel is easy to use and access. You will get 1-click script installer, eCommerce tools, SSL/TLS certificates from Let’s Encrypt, and automated malware scans from Dreamhost. Also, the support team of Dreamhost is really good and expert in their work. Support is always available through Phone, Email, Live Chat, and Twitter.

Siteground: You are getting priority support from siteground with their own live chat software. Also, the ticketing system is also available for customer help. Siteground offers free migration service for new customers. At pricing point, there is nothing much to talk about with Siteground. So, let’s see comparison table below for quick decision.

Dreamhost is clearly the option in WordPress managed hosting. So, if you are looking for a WordPress hosting then Dreamhost is the all-time choice.

Siteground is also a WordPress recommended hosting. Siteground does have some dedicated WordPress features. They do offer free migration service for WordPress websites. It offers auto updates to your plugins and wordpress platform. Like Dreamhost, they do have a setup which prevents WordPress installation from infection.

VPS stands for Virtual Private Server. Both the providers are having a lot to offer in VPS hosting. In short, winner in this segment is Dreamhost. Let’s see how both the hosting offers and performs in this segment.

Dreamhost: It offers scalable RAM and SSD storage. Their VPS plans are built to provide powerful, fast and stable environment to customers for continous growth. RAM options are available from 1GB to 8GB and storage options ranges from 30GB to 240GB. Storage and RAM options on dreamhost matches the industry average but the pricing is pretty good and affordable too. As their servers are SSD powered, your website performance gets boosted by 20 times compared to SATA drives. You are also getting free SSL / TLS certificate along with dedicated IP along with unlimited bandwidth, emails and domains usage. You can manage virtual servers from dreamhost’s custom control panel which is being used and continously improved from over 15 years. Also, there is a dedicated MySQL VPS service which boosts performance of website. Their Linux-VServers dedicate initial 2300MB of RAM to your website.

Siteground: On the name of VPS servers, siteground doesn’t have anything exactly VPS. They call their cloud platform similar to VPS server along with SSH access. They do offer their custom made SuperCacher which enhances performance of your website by using 4 different caching methods. Here, siteground doesn’t offer somethign extra ordinary about which we should talk. So, as per the prices are concerned and performace too, Dreamhost is clear winner.

In this segment, Both Siteground and Dreamhost stands on a similar place. So, for us the only major difference will be pricing. So If you want a cheaper option then dreamhost is the one you should go with. Dreamhost is good as an affordable yet quality hosting provider. Also, In wordpress hosting and VPS hosting, dreamhost is better option than siteground. So, let’s see how it goes in this segment.

Dreamhost: When traffic grows, you need to upgrade your hosting. So, If you are already on VPS hosting then you have to upgrade to dedicated hosting if your traffic grows. Dreamhost is a premium provider of dedicated hosting. This 20 years old hosting provider offers 3x cores and 4x RAM than its competitors. Along with this, you are being served with 2TB of SSD storage, unlimited bandwidth and 100% uptime guarantee. All the dedicated servers from dreamhost comes with root, shell access, DDoS protection, RAID 1 storage, and unlimited MySQL databases. Their customized cPanel makes management of server very easy.

Siteground: They are having datacenters in US, Europe, and Asia. Servers of Siteground offers scalability, speed and security. Compared to Dreamhost, Siteground is an expensive affair. Maximum available cores are 2×6 and maximum CPU threads are 2×12 in siteground dedicated hosting plans. Maximum available RAM is 64GB in both the hosting providers. Here, siteground’s bandwith is limited to 10TB where dreamhost doesn’t have any limit on bandwidth you use. So, let’s see further in comparison table below.

Siteground is a little hyped on a lot of websites when we compare it with Dreamhost. In our review, both the hosting providers are good. The only big factor is pricing. Also, for Dedicated hosting and Shared hosting plans, our recommendation will be Siteground and for VPS and Managed WordPress hosting, our recommendation will be Dreamhost. Also, if you are limited in your budget then never mind going with Dreamhost, it is one of the well known and quality host out in the market.

Transparency Declaration: We are no way paid from any of the companies mentioned above to write this Dreamhost vs Siteground comparison review. So, the results and facts in this review is totally unbiased and true. You can rely on us.

Get Dreamhost at 40% Discount (Use Coupon “Hosting595Coupon” on Checkout)
Get Siteground at 66% Discount, Automatically Applied

This site uses Akismet to reduce spam. Learn how your comment data is processed.

Become our Member and Get Interesting Stuff & Freebies Every Week

Thank you for subscribing.